Thankful for the Horror

Tracing the permeability of survival through literary domiciles

Some of you probably had the chance for a lovely Samhain walk recently where you got to tinker with some semblance of normalcy, presumably while maintaining a safe distance from everybody.

And for those of you who voted out a tyrant this week, well, get used to that hankering you harboured for the past four years, that *chef’s kiss* triumph.

Of course, all these and more may have been of help for many to get by when trick-or-treating was cancelled for the first time. And from this, we can infer that 2020 has been nothing but a pastiche of hell with all of its nine (or, to some, seven) glorious circles set ablaze, a view that we have closely observed from within the close confinement of our own home for months on end.

Without the need to reiterate every single misfortune that all of us could have been encumbered with, it is safe to say that barricading ourselves into a safe place like our home can be quite an entrapment of its own. It permeates the air of our place with the idea of ambivalence.

In light of the pandemic, we see lost lives measured in mere numbers, couples fallouts, teenage depression on the rise, seismic shifts in the global economy, and the blurred boundaries that the work-from-home workforce have to observe when home becomes a workplace.

It is safe to say, domicile entrapment creates the air of haunts and taunts that pretty much covers the whole year, obscuring us by overcast.

Fernando Pessoa once said, “Literature is the most agreeable way of ignoring life.” However, we do not want to ignore what’s happening, instead, we want to use literature to decipher the very idea of survival, helping us to build resilience even when surviving is crushing.

What Can We Learn From Literature

No one has ever shown the same passion in the imagery of hell quite like the president of Argentina, Bartolomé Mitre (1862–1868), who was an author himself.

He wanted Argentina to learn from the best when he adopted the glory of Dante Alighieri’s The Divine Comedy. He had translated Comedy into Spanish himself in the hope that his people could emulate Italy, ‘the mother of civilisation.’

Mitre’s sentiment denotes agreeable practicality in these trying times. We want to communicate our way to survive the domicile entrapment through literature when finding ourselves lost in books is elevating.

One of the rising voices in contemporary American literature, Matt Ruff, created a fantastical world through a poetic imagination of a mental habitation for multiplied identities.

It involves psychological geography showing lucid details of his protagonist’s disintegrated unconsciousness, living with dissociative identity disorder (DID) in Set This House in Order: A Romance of Souls (2003).

Matt Ruff, author of Set This House in Order and Lovecraft Country. Photo taken from the Economist.

The novel explores the life of Andy Gage whose mind is set off balance with a carnival of alters that move an intricate plot of a journey to individuation. The house inside Andy’s mind contains all of his other alters (or Ruff would call them ‘Souls’) to form a sense of order for the equilibrium of Andy’s mind.

We get to trace the house as an allegory that alludes to Andy’s broken childhood when his original self Andrea Samantha Gage was disintegrated into multiplied identities as a result of severe childhood trauma:

‘The house, along with the lake, the forest, and Coventry, are all in Andy Gage’s head, … With the help of a good doctor … he constructed a geography in Andy Gage’s head, a sunlit country house where the souls could see and talk to one another. He created the house, so they’d have a place to live; the forest, so they’d have somewhere to be alone; the pumpkin field, so the dead could be decently buried.’

Andy Gage navigates his life methodically with the help of his alters. The room where he physically lives in encapsulates the compartmentalised element of his life as a person with DID.

In a lot of ways, Ruff’s approach exudes the familiar ‘haunted’ or ‘peculiar’ house which is pervasive in literature with the likes of Edgar Allan Poe’s The Fall of the House of Usher (1839), Nathaniel Hawthorne’s The House of the Seven Gables (1851), Henry James’s most celebrated The Turn of The Screw (1898), Shirley Jackson’s The Haunting of Hill House (1959) and The Bird’s Nest (1954), and contemporaries like Laura Purcell and Diane Setterfield with Bone China (2019) and The Thirteenth Tale (2006) respectively.

For another example, The Bird’s Nest is arguably Shirley Jackson’s least celebrated work. And where Set This House in Order is richly populous, The Bird’s Nest is a study in solitude which centres around a young white woman, the reclusive Elizabeth Richmond, willing her life away in 1950s America.

Like Ruff’s creation, Elizabeth Richmond, too, suffers an equilibrium imbalance where she has to face three alters that represent specific points in her life namely Beth, Betsy, and Bess.

The word ‘nest’ in the title implies a similar containment of metaphysical identities with that of Andy’s mental domicile, albeit not as clear and elaborate.

The disorder disrupts Elizabeth’s life as the opening chapter describes her as unpretentiously bleak. Jackson was honest in contextualising her agenda in showing the multiplied representations of her young protagonist.

Elizabeth’s state of mind is suggested by the state of the museum where she works; ‘its foundation had begun to sag’ followed by what the omniscient narrator insinuates, “it is not proven that Elizabeth’s personal equilibrium was set off balance by the slant of the office floor, nor could it be proven that it was Elizabeth who pushed the building off its foundation, but it is undeniable that they began to slip at about the same time.”

In retrospect, Shirley Jackson was not so keen on the psychoanalytical leaning for her protagonist. What the author always wanted was a portrayal of multiplicity that would reflect the forced, expected roles of women in Post-war America.

In the 2016 biography of Shirley Jackson: A Rather Haunted Life, Ruth Franklin wrote, “… the particular focus on multiple-personality disorder may well have had more to do with the cultural anxiety surrounding the reorientation of women’s lives around the domestic sphere.”

It outlines the multiple roles a woman had as a ‘wife, mother, and professional.’ As a result, this ‘threatened a male-dominated culture invested in glorifying the stability of family life based on traditional gender relations and keeping women out of the workforce.’ The novel is a comedy with dark undertones which deserves a contemporary rereading, in that it can help with the subject of today’s domesticity which has been deepened by the pandemic.

The latest offering is the third book by Susanna Clarke which Paraic O’Donnell succinctly describes ‘an elegant study in solitude.’

A 16-year wait is a long time. And if you, like me, were so heavily enthralled by the world Susanna Clarke had created for her Victorian magicians, Jonathan Strange & Mr Norrell, then a fantasy like Piranesi is the perfect victual for our literary sustenance. 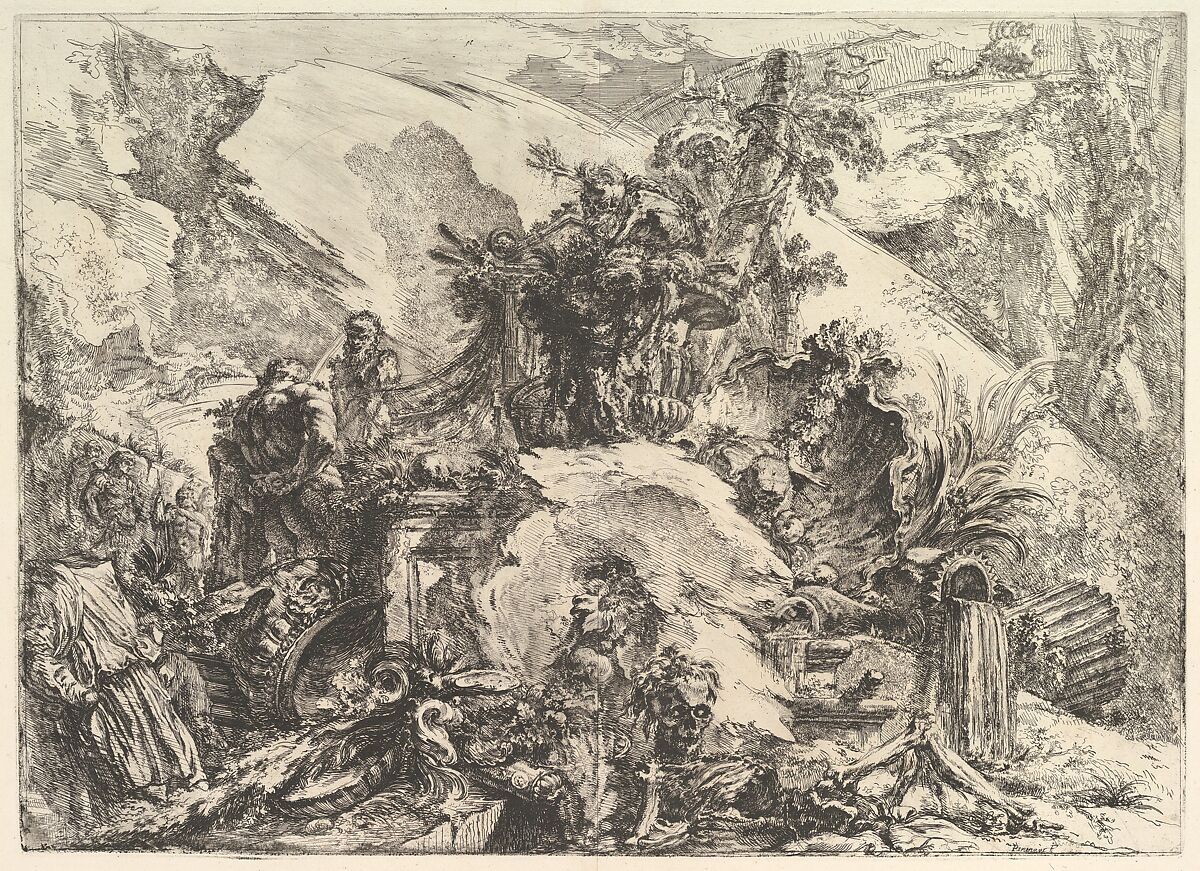 The Skeletons from Grotteschi (Grotesques) by Giovanni Battista Piranesi. Photo taken from metmuseum.org.

The protagonist, Piranesi, believes his house is his entire universe. He lives by appreciating the beauty in the house, in that his approach to survival is through respect and self-care.

The author’s treatment of domicile as a subject is similar to Nest and House where the plot develops with the main character’s complexity. Piranesi is a charming, scholarly character whose naivety resounds greatly in that of Matt Ruff’s creation, Andy Gage.

‘Piranesi’s house is no ordinary building: its rooms are infinite, its corridors endless, its walls are lined with thousands upon thousands of statues, each one different from all the others. Within the labyrinth of halls an ocean is imprisoned; waves thunder up staircases, rooms are flooded in an instant. But Piranesi is not afraid; he understands the tides as he understands the pattern of the labyrinth itself. He lives to explore the house.’

Piranesi calls himself a scientist, and he and another character called the Other are searching ‘diligently for Knowledge’. The fantastical home to Piranesi alludes to the ambivalence that I have introduced earlier that a house can be your solitude and isolation, a barricade and a tomb all at the same time.

But Piranesi, with his vigorous verisimilitude and his articulate language of altruism, chooses to appreciate what he has like the way he professes his appreciation for the Other, ‘He is a scientist like me and the only other living human being, so naturally I value his friendship highly.’

At the same time, he continually affirms his individuality with the analytical mind of his own evident when he discovers the skeletons of the people of the Alcove as he naturally retires to cogitate through the pages of his journal, ‘Question: when I feel myself about to die, ought I to go and lie down with the People of the Alcove? There is, I estimate, space for four more adults. Though I am a young man and the day of my Death is (I hope) some way off, I have given this matter some thought.’

In all of its glory and vastness, the cosmic house fails to contain the control of who Piranesi is. And as the voice of Chiwetel Ejiofor reverberates even long after the audiobook ended, “I am determined to explore as much of the world as I can in my lifetime,” Piranesi’s affirming hopefulness becomes one with mine.

Bringing It All Together

What all these books unanimously did in all their familiar rumination of the dwelling is the ever-evolving journey to finding and affirming one’s identity and the characters’ abject gratitude for life.

This is what literature has for us.

It gives us the agency to deconstruct these characters whose lives evoke complexities.

These books underline the characters’ arc without compromising the depth of who they are from within. Positive viewpoint will always be helpful in making sense of every struggle therefore homebound won’t feel much of a binding curse but remain a safety net against the lurking danger.

“The mystery of human existence lies not in just staying alive, but finding something to live for.”

Go on now, stay hopeful, pick a book today. I, for one, look forward to Cassandra Khaw’s Nothing But Blackened Teeth expected in 2021.

This article is written by Odin (not his real name), a guest contributor for Illuminairre. He is a Malaysian Word-slinger, Scholar, Literary Enthusiast and Tea-Cat worshipper.

Note to readers **I’m revisiting this article that I penned six years ago in 2015 , at a time I was ‘in the eye of the hurricane’, exploring...

END_OF_DOCUMENT_TOKEN_TO_BE_REPLACED

From Catnip to Cacao: A Brief History of Chocolate and How It Makes Us Feel

Recently, a study on catnip (Nepeta cataria) and silver vine’s (Actinidia polygama) effects on cats has been published in Science Advances. Turns...

END_OF_DOCUMENT_TOKEN_TO_BE_REPLACED

The Gift Exchange On Christmas

Disclaimer: This is a work of fiction. Names, characters, businesses, places, events, locations, and incidents are either the products of the...